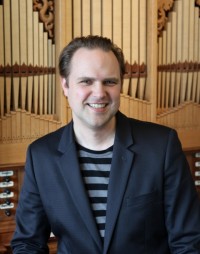 Jonathan Wohlers is Director of Music at Trinity Lutheran Church. He holds degrees in musicology and organ performance from the New England Conservatory of Music, and a doctorate from the Moores School of Music at the University of Houston. As a part of his doctoral work he engaged in research on Southern Netherlands organ music of the 17th century, including a study and transcription of a group of 52 versets found in a manuscript of anonymous organ music from ca. 1618, British Library Add. MS 29486; together they comprises one of the earliest known collections of pieces, arranged by mode, called fugue.

Dr. Wohlers has performed widely in the U.S. and Europe and Japan. He holds a high interest in historically informed instruments. Before moving to the Pacific Northwest he was organist at Christ the King Lutheran Church (ELCA), Houston, on the “Bach Organ” built by Fritz Noack where he also played for the Bach Society of Houston. Other performance activites include duo concerts on organ and harpsichord with his spouse, Naomi Shiga. In addition, he is a former Dean of the Tacoma Chapter of the American Guild of Organists, is a lecturer on the music faculty at Pacific Lutheran University, and is Artist in Residence on Paul Fritts & Co. Opus 13 at St. Andrew’s Episcopal Church, Tacoma.

The Director of Music may be contacted at musician@trinitylutheranparkland.org.

The Messenger – Trinity’s Newsletter for December 2020

The Messenger – Newsletter for October-November 2020

The Messenger – Newsletter for August-September 2020

The Messenger – Newsletter for June-July 2020